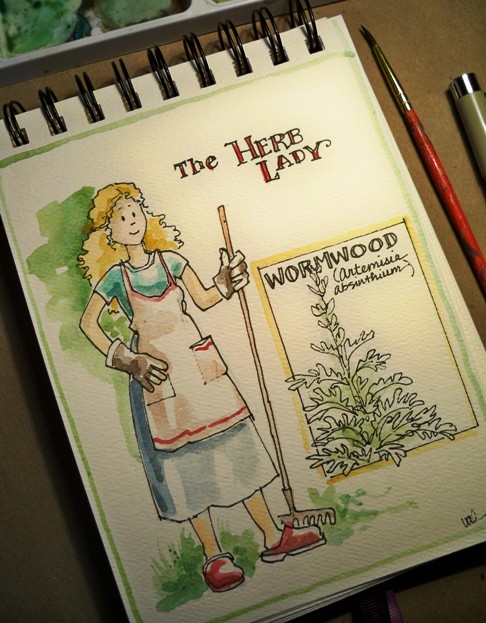 What I know of the divine science and Holy Scripture I learnt in the woods and fields.    — St. Bernard, 12th Century sustainable organic gardener

I lived in the mountains then, in a little house on a ridge eight miles from the nearest small town. I was seven months pregnant, had a big garden, a two-year-old, a four-year-old and a difficult marriage. Because the house was isolated, had no phone or television, and my husband was only home on weekends, I spent most of the time alone with two young children and the gentle embrace of the surrounding mountains for company. Money was tight, so I drove into town just twice a month for supplies and a fresh stack of library books. We read, hiked and gardened while it was warm. When it got cold, we read and I chopped wood. The girls played in the creek to the west of us, or in the pasture to the east. It wasn’t a bad life, but it could sometimes be awfully lonesome.

During one of my bi-monthly supply runs, a shopkeeper told me about the Herb Lady.  “She grows all kinds of herbs up at her place. Herbs to cook with, herbs for medicine, everything. And this time of the year, she’s dividing the plants and she’ll send you home with bags full of roots and cuttings. I’ll draw you a map,” the woman said helpfully. In my mind’s eye, I pictured an ancient, plantwise granny… someone who might welcome a visitor interested in herb lore. The shopkeeper paused from drawing a complicated series of squiggles.  “It can be a little bit hard to get to,” she said. ” What kind of vehicle you got?”

But for a chance to visit with a real, live adult person and have a conversation that went beyond a cash register transaction, I was prepared to navigate some wilderness. Two hours later, miles from the place we had turned off the paved road, our little station wagon bucked and slid along a muddy track through the woods. It was unusually quiet in the back seat, where two small passengers frowned as tree branches scraped the sides of the car. I hoped the map drawn on the back of my hardware store receipt was accurate. I hoped that if it wasn’t, I would manage to get the car turned around on the ever-narrowing trail. I also hoped (perhaps most of all) that if my previous two hopes didn’t work out, the mountain panthers I’d read about in my latest library book were well and truly extinct.

The thick canopy overhead parted abruptly, spilling sunlight down on us, and the trail opened up into a cozy little valley. The Herb Lady’s tiny farm looked like a Disney movie set: red barn, white cottage, antique pickup truck. A fat tom turkey came strutting up the driveway to scrutinize us with his beady eyes. And then there was the garden.

Herbs climbed trellises on three sides of the cottage, spilled over the porch railings and sprawled in rock-walled beds . It was August and the plants were at their peak maturity, so it was easy to pick out the familiar culinary varieties — dill, chives, a vast mass of Greek oregano, four kinds of basil — happily growing in the largest and most diverse herb garden I had ever seen.

The Herb Lady was around back, knee-deep in a drift of comfrey, and she greeted me as if we were old friends.  She wasn’t a granny after all.  All that herb knowledge was walking around in a slender, twentysomething frame with red garden clogs and a halo of frizzy blond hair. She poured mugs of mountain sumac “lemonade” for each of the girls, then took me on a grand tour of the herb beds. For nearly two hours, I enjoyed a wonderful, adult-vocabulary-level conversation about planting, cultivating and harvesting herbs. Every few minutes, the Herb Lady stooped to pull apart a root system or separate a clump of stems, and she handed me the new plant wrapped in a piece of newspaper. By the end of our herb walk, the ingredients for a very respectable kitchen garden lay stacked neatly in the grass.

The last plant she showed me was a thick, feathery profusion of silvery stalks and leaves. It was strange and beautiful, and it was taller than I was.

“This is wormwood,” the Herb Lady said. “Artemisia absinthium. But I only grow it for historical interest. I can’t give you any to take home.” And then she told me about this powerful, bitter herb: a popular medieval remedy for worms, as its name implies; a distant cousin to sagebrush; an ingredient in absinthe, a notorious drink in nineteenth-century Europe; an herb associated with grief and mourning in cultures all over the world. Finally, she pointed out, it repels fleas and moths — which is why she grew it just outside her back door.

“If you’re Catholic, you might be interested to know that wormwood is part of the story of St. Bernard,” the Herb Lady said. I wasn’t Catholic, but I was interested in the story anyway: frail and pious, Bernard was only 22 when he was made abbot over 12 other monks. They were sent to found a new monastery in the desolate Valley of Wormwood, in medieval France. For years, the little group lived on wild herbs and water while they struggled to clear enough of the forest to plant the garden that would eventually sustain them. The garden and the monastery were successful, and the monks’ simple devotion attracted and inspired a large number of people. Faith, patience and a garden were the only tools they had at their disposal, but that was enough.

Later, I drove home on the narrow mountain roads with two little girls asleep in the back seat and a car that smelled like a giant bouquet garni. With hours of happy conversation behind me and hours more of happy gardening ahead, I remember thinking that even in the Valley of Wormwood, there must have been a few really good days. 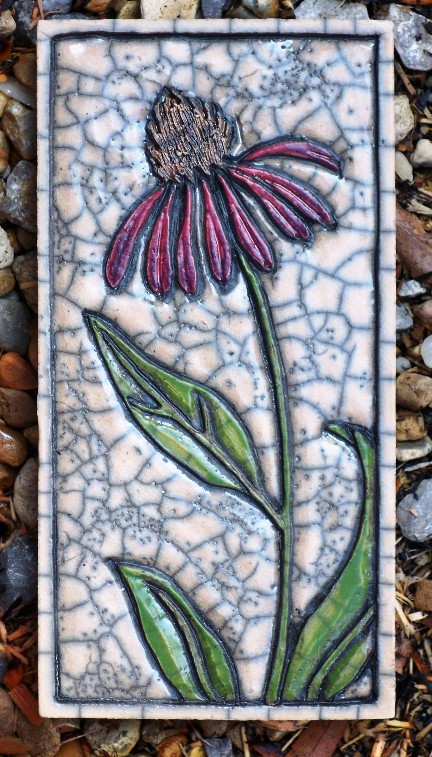 I love to draw (and carve) my favorite plant, purple coneflower. It grows easily from seed when the soil temperature is above 70 degrees — which is most of the year, where I garden.  This whimsical medicinal loves compost, moderately moist soil and lots of sunshine. The native people of the prairie states used it more than any other healing plant, using mainly the root to treat a litany of ills from snakebite to venereal disease. I’m sure it was a primary ingredient in my Tennessee great-granny’s annual “tonic” — the springtime infusion she used every year to purify her blood. She learned to cultivate, harvest and compound medicinal plants early in the last century, when summer was dreaded as a season of increase in disease — and deaths — among infants and young children. Families fled the cities during those months, and country people like my Granny Griff fortified themselves with a concoction of botanicals valued for its immune-boosting effect.

So where’s the hedgehog in all this? Well… 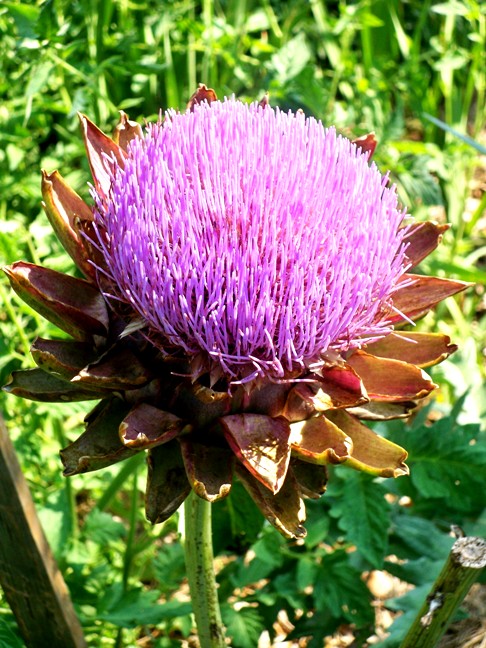 It was hard, but we refrained from eating this one

Last year, compelled by his rich Italian heritage, The Perfect Man planted artichokes. Tender gray-green leaves sprouted, stalled and then took off in a lavish display of foliage that radiated three feet from the central stalk. This spring, a promising vertical shoot rose from the plant’s base, and then another. And another. Soon, there were tasty green artichokes aplenty. We ate them, shared them, and in an almost superhuman effort (for two artichoke lovers, anyway) left one on the plant to bloom. The huge, surreal artichoke flower is a study in contrasts: thorny and tender, aromatic and yet faintly stinky. Bees love them.

I’m proud of The Perfect Man’s artichoke crop. I’ve never seen them grow in this region… in fact, I had never heard of them being cultivated in the United States outside California.  Native to the Mediterranean, they were adored by the Romans — not only as a culinary delight, but also as a popular pre-Viagra remedy for men who lacked a certain lustiness. From its earliest cultivation, deep in the recesses of history, the artichoke has been a world leader in the “sexiest vegetable” category.

With the collapse of the Roman Empire, the artichoke dropped off the cultural radar for awhile. But by the Middle Ages it reappeared, and was quickly forbidden to young maidens, lest they become overwhelmed by its reputedly potent aphrodisiacal powers.  Luckily for artichoke fans (as well as young maidens) the unconventional Catherine de Medici ate them constantly, and even included them in her trousseau when she arrived in France for her wedding with King Henry II. Soon French cooks discovered what the Italians had known all along: artichokes are scrumptious.

But don’t take my word for it… check out the recipe section here. Happy eating, maidens! Try not to be overwhelmed.

Fennel — sweet or bronze — is a favorite swallowtail caterpillar delicacy, along with carrots and parsley. It’s worth growing a few plants just to attract these beautiful little creatures, with their vivid custom paint jobs and voracious appetites.

So graceful and leggy, fennel has always had a place in our family herb garden. A half-teaspoon of the aromatic seeds, steeped in a cup of hot spearmint tea, is a soothing and safe remedy for nausea. I bruise the spearmint leaves and fennel seeds alike (crushing under a wooden spoon will do the trick) before pouring boiling water over them. Steep for five to seven minutes, strain the liquid, and sweeten with honey if desired.

The stalks are a good substitute for celery in soups.

Children like fennel’s delicately licorice taste. When my girls were small, I’d find them in the garden on summer afternoons, nibbling the feathery leaves like a herd of two-legged deer. Even at three or four years old, they could instantly distinguish between fennel and dill. I had to shoo them out of the herb garden when their grazing got out of hand, or risk not having any fennel for the kitchen.

After watching the caterpillars dine for a while, I banished faithful garden dog Atticus to the house (he loves to chase flying insects) and brought the camera out. An adult black swallowtail posed for me — a female, judging from the iridescent blue patches on her hind wings. I hope her presence, lingering among the low-growing greenery, will result in a fresh crop of fat caterpillars in seven or eight days.

Atticus, meanwhile, thinks he should be allowed to participate in some up-close butterfly observation. 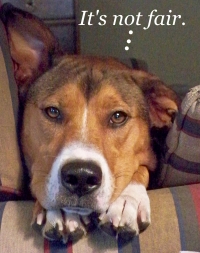